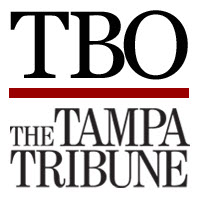 “War Virgin” is a musical comedy that draws its inspiration through a New Port Richey veteran’s journey of sexual awakening.

Written by Laura Westley, a 1997 graduate of River Ridge High School who also serves as the narrator, “War Virgin” is an absurdist look at her experience with the military, set against the backdrop of an overbearing father who insisted she abstain from sex.

From conversations with her father about not losing her “sparkle” — a gleam in her eyes that would indicate if she were not yet “damaged goods” — to life at West Point and then being in the initial thrust during the invasion of Iraq in 2003 — “War Virgin “is the antithesis of the “so-there-we-were” genre of battle recollections.

“If I see another all-American male hero storming some hill with, or another book written about West Point and how everyone is robotic and perfect, I just want to throw up,” says Westley, whose musical, replete with Weird Al Yankovic-like song parodies, debuts Saturday night at the New Port Richey Library.

If Westley, 36, has a governor switch that limits her topics of conversation, it’s broken.

Her discussin about divorce is just one example.

“I’m no longer married to him,” she says of the Army helicopter pilot from whom she is now divorced. “You can put that in the story. I have no shame.”

As the salutatorian of her New Port Richey high school class, she is no stranger to having slices of her life in the public eye. But after leaving the Army as a captain in 2006, and coming to grips with depression, estrangement from family and friends and a suicide attempt, Westley is a self-described open book, willing to discuss things that most people, military or civilian, would rather keep hidden.

But aside from the performance aspect, which includes writing and singing and dancing, Westley says there is a greater purpose for her candor.

“I almost feel like the champion of the masses,” she says over a bowl of oatmeal at a New Port Richey diner. “I want to inspire other people to come forward with their stories because a lot of people don’t feel like they have a voice.”

“A lot of people, especially at West Point, struggle with the image of perfection,” says Westley. “There are not enough vulnerable West Pointers out there.”

Westley says she wants to “educate the public and inspire a feminist movement in the military, so women can stop having to apologize for their gender and be accepted for who they are.”

She says she has a plan for a traveling company, either with the current troupe or a road company, with the ultimate goal being a Broadway production.

Westley serves as the play’s narrator and sings as well. Put on by the Gypsy Stage Repertory, it is directed by Lil Barcaski and stars Tracy Roese, Tim Guerrieri, Jonathan Thornsberry and Danny-Ray Polson.